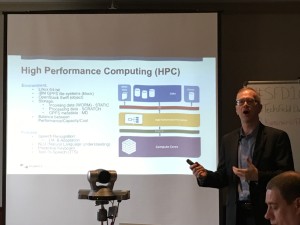 In episode 33 we talk with Frederic Van Haren (@fvha), founder of HighFens, Inc. (@HighFens), a new HPC consultancy and former Senior Director of HPC at Nuance Communications. Howard and I got a chance to talk with Frederic at a recent HPE storage deep dive event, I met up with him again during SFD10, where he was talking on behalf of Kaminario, and he was also at HPE Discover conference last week.

Nuance is the backend speech recognition engine for a number of popular service offerings. Nuance looks very similar to a lot of other hyper-scale customers and ultimately, we feel may be the way of the future for all IT over the coming decades.  Nuance’s data storage journey since Frederic’s tenure with the company holds many lessons for all of us in the storage industry

Nuance currently has ~6PB usable (~16PB raw) of speech wave files as well as uncountable text and other files, all inside IBM SpectrumScale (GPFS).  They have both lots of big files and lots of small files. These days, Spectrum Scale is processing 2-3M files/second. They have doubled capacity for each of the last 9 years, and today handle a billion new files a month. GPFS stripes data across storage, provides data protection, migration, snapshotting and storage tiering across a diverse mix of storage. At the end of the podcast we discussed some open source alternatives to Spectrum Scale but at the time Nuance started down this path,  GPFS was found to be the only thing that could do the job. This proved to be a great solution as they have completely swapped out the underlying storage at least 3 times and all their users were none the wiser.

The first storage that Frederic talked about was Coraid (no longer in business) and their ATA over Ethernet storage solution. This used a SuperMicro with 24 SATA drives/shelf and they bought 40 shelves. Over time this grew to 1000s of SATA drives and was easily scaleable but hard to manage, as it was pretty dumb storage. In fact, they had to deploy video cameras, focused on drive shelves, to detect when drives failed!

Overtime, Nuance came to the realization that they had to do something more manageable and brought in HPE MSA storage to replace their Coraid storage. The MSA was a great solution for them which had 96 SAS drives, were able to support both faster “SCRATCH” storage using fast SAS 300GB/15KRPM drives and slower “STATIC” storage with slower SATA 760GB/7.2KRPM drives and was much more manageable than the Coraid solution.

Although MSA storage worked great, after a while, Nuance’s sprawling FC environment which was doubling yearly, caused them to rethink their storage once again. This led them to swap out all their HPE MSA storage, for HPE 3PAR to consolidate their FC network and storage footprint.

For metadata, Nuance uses a 76 node, Hadoop cluster for sophisticated search queries as doing an LS on the GPFS file system would take days. Their file meta-data is essentially a textual, row by row database and they use queries over the Hadoop cluster to determine things like which files have american english, spoken by females, with 8Khz recording.  Not sure when, but eventually Nuance deployed HPE Vertica SQL over Hadoop for their metadata engine and dropped average query from 12 minutes to 73 sec.(!!)

Nuance, because of their extreme growth and more open environment to storage innovation, had become a favorite for storage startups and major vendors to do Proofs of Concepts (PoC) on new storage offerings. One PoC, Nuance did was for Kamanario storage. There is a standard metric that says a CPU core requires so many IOPS, so that when CPU cores  increase,  you need to supply more IOPS. They went with Kaminario for their test-dev environment and more performance intensive storage. Nuance appreciates Kamanario’s reliability, high availability and highly predictable performance. (See the SFD10 video feed for Frederic’s session)

We talked a bit about how speech recognition’s Hidden Markov Chain statistical model was heavily dependent on CPU cores. Today, if you want to do a recognition task, you assigned it to one core and waited until it was done, a serial process dependent on the # of CPU cores you had available. This turned out to be quite a problem as you had to scale CPU cores if you wanted to do more concurrent speech recognition activities. Then came GPUs and you could do speech recognition work on a GPU core. With the new GPU cards,   instead of a server having ~16 CPU cores,  you could have a server with multiple Graphic cards having 3000-GPU cores. This scaled a lot easier. Machine learning and deep neural nets have the potential to parallelize this, so that it will scale even better

In the end, HPC trials, tribulations and ways of doing business are starting to become  mainstream. I was recently talking to one vendor that said, most HPC groups start out in isolation to support one application but over time they either subsume corporate IT or get absorbed into corp. IT or continue to be a standalone group (while waiting until one of the other two happen).

The podcast runs ~41 minutes and  covers a lot of ground about one HPC organization’s evolution of their storage environment over time, what was driving some of that evolution and the tools they chose to master it.  Listen to the podcast to learn more. 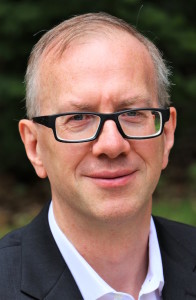 Frederic Van Haren is the Chief Technology Officer @Highfens and known for his insights in the HPC and storage industry. He has over 20 years of experience in High Tech providing technical leadership and strategic direction in Telecom and Speech markets. Frederic spent the last decade at  Nuance Communications building large HPC environments from the ground up. He is frequently invited to speak at events to provide his insights on the HPC and storage markets. He has played leading roles as President of a variety of technology user groups promoting the use of innovative technology. As an Engineer he enjoys working with the engineering teams from technology vendors providing feedback on new and upcoming products.

Frederic lives in Massachusetts,  USA but grew up in the northern part of Belgium where he received his Masters in Electrical Engineering, Electronics and Automation.