In this edition we discuss ClearSky Data’s global storage service with Ellen Rubin (@ellen_rubin), CEO & Co-Founder and Laz Vekiarides (@lazvek), CTO & Co-founder of ClearSky Data.  Both Ellen and Laz have been around the IT industry for decades and Laz in particular was deeply involved in the development of EqualLogic storage systems both at Dell and at EqualLogic, prior to the acquisition.

ClearSky Data provides a global, primary storage service that connects edge device(s) in the data center that supply a read/write cache for iSCSI block storage to a point-of-presence (PoP) appliance in the metro area which uses cloud storage as its backend storage repository . We get into the technology later but essentially a customer pays a $/GB/month fee and all the edge, point-of-presence hardware and cloud storage repository is bundled into that monthly price.

The service is implemented as a two level caching service: level one at the edge is a cluster of 2U appliances with compute, DRAM and up to 24 SSDs and a dedicated metro-ethernet networking link to the PoP; level two at the PoP includes a dual HA server configuration with a JBOD with even more SSDs that has a direct link to Amazon Web Services Simple Storage Service (AWS S3).

Data is compressed, (inline or post-process) deduped and encrypted at the edge. Encryption keys are kept by the customer. Data written to the edge is synch-mirrored to the PoP and when the PoP fills up or the customer’s time interval has elapsed, their data is destaged to Amazon S3 which can then be replicated to other regions, where needed.

As part of their service, ClearSky Data also offers disaster recovery. As all customer data resides in S3, it can easily be supplied to another edge appliance (with the proper keys) at any other metro area location connected to one of their PoP’s.

ClearSky Data handles eventual consistency (not all copies of the data residing in  cloud storage may be the same) by versioning the cloud data objects and providing point-in-time consistency.

At the edge, the service can be deployed as a cluster of appliances that work together to support the IO workload and the PoP is configured to handle whatever IO workload is required in the metro area. Activity at the edge is heavy compute (compression, dedupe and encrypting all the data that comes in) and workload at the PoP is more IO bandwidth/networking based.

ClearSky Data currently has PoP’s in Las Vegas, Philadelphia and Boston with more on the way in the US. Today, ClearSky Data offer’s iSCSI interface protocols but have plans to provide FC, NFS and SMB support as well.  As we recorded the podcast, ClearSky Data’s  service was not quite GA yet, but were close.

Full Disclosure: Howard has worked for ClearSky in the past.

This months edition runs just under 41 minutes and gets into the business side and technical side of their service. Ellen provided the business view and Laz handled all the technical questions Howard and I threw at him. We hope you enjoy the podcast. 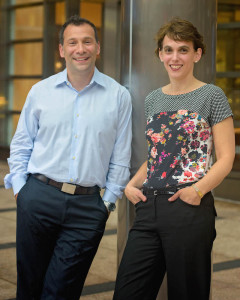 Ellen Rubin is an experienced entrepreneur with a proven track record in leading strategy, market positioning and go-to-market for fast-growing companies. Most recently she was co-founder of CloudSwitch, a cloud enablement software company that was successfully acquired by Verizon in 2011. At Verizon, Ellen ran the cloud products group and was responsible for the strategy and roadmap for all cloud offerings.

Prior to founding CloudSwitch, Ellen was Vice President of Marketing at Netezza (NYSE: NZ), the pioneer and global leader in data warehouse appliances that power business intelligence and analytics at over 200 enterprises worldwide. As a member of the early management team at Netezza, Ellen helped grow the company to $130 million in revenues and a successful IPO in 2007. Ellen defined and created broad market acceptance of a new category, “data warehouse appliances,” and led market strategy, product marketing, complementary technology relationships and marketing communications.

Prior to Netezza, Ellen founded Manna, an Israeli and Boston-based developer of real-time personalization software. Ellen played a key role in raising over $18 million in venture financing from leading US and Israeli venture capital firms, recruiting the US-based management team and defining product and market strategy. Ellen began her career as a marketing strategy consultant at Booz, Allen & Hamilton, and holds an MBA from Harvard Business School and an undergraduate degree magna cum laude from Harvard College. She speaks regularly at industry events and has been recognized as one of the Top 10 Women in the Cloud by CloudNOW, as a Woman to Watch by Mass High Tech and Rising Star Entrepreneur by the New England Venture Capital Association.