This months it’s back to storage and our annual wrap-up on the Flash Memory Summit Conference with Jim Handy, General Director of Objective Analysis. Jim’s been on our show 5 times before and is a well known expert on NAND and SSDs (as well as DRAM and memory systems). Jim also blogs at TheSSDGuy.com and TheMemoryGuy.com just in case you want to learn more.

FMS went virtual this year and had many interesting topics including how computational storage is making headway in the cloud, 3D QLC is hitting the enterprise with PLC on the way, and for a first at FMS, a talk on DNA storage (for more information on this, see our podcast with CatalogDNA). Jim’s always interesting to talk with to help us understand where the NAND-SSD industry is headed. Listen to the podcast to learn more.

Jim mentioned that the major NAND vendors are all increasing the number of layers for their 3D NAND, and it continues to scale well. Most vendors are currently shipping ~100 layer NAND, with Micron doing more than that. And vendor roadmaps are looking at the possibility of 200 layers or more. Jim doesn’t think anyone knows how high it can go.

Another advantage of 3D NAND is it can be used to make bigger bit cells and thus have better endurance. From Jim’s perspective more electrons per cell means a better more resilient bit cell.

Many vendors in the nascent persistent memory industry were all hoping that NAND would stop scaling at some point and they would be able to pick up the slack. But NAND manufacturers found 3D and scaling hasn’t stopped at all. This has relegated most persistent memory vendors to a small niche market with the exception of Intel (and Micron).

Jim said that Intel is losing money on Optane every year, ~$5B so far. But Intel knows that chip profitability is tied to economies of scale, volumes matter. With enough volume, Optane will become cheap enough to manufacture that they will make buckets of money from it.

Interestingly, Jim said that DRAM scaling is slowing down. That means there may be an even bigger market for something close to DRAM access speeds, but with increased density and lower cost. Optane seems to fit that description very well.

Jim also mentioned that computational storage is starting to see some traction with public cloud vendors. Computational storage adds generic compute power to inside an SSD which can be used to perform storage intensive functions out at the SSD rather than transferring data into the CPU for processing. This makes sense where a lot of data would need to be transferred back and forth to an SSD and where computational cycles are just as cheap out on the SSD as in the server. For example, for data compression, search, and video transcoding, computational storage can make a lot of sense. (See our podcast with NGD systems for more informaiton).

In contrast, Open-Channel SSDs are making dumb SSDs, or SSDs without any flash translation layer or other smarts needed to make NAND work as persistent storage bin the enterprise. There’s a small group of system providers that want to perform all this functionality at a global scale (or across multiple SSDs) rather than at the local, SSD drive level.

Another topic that hit it’s stride this year at FMS2020 was Zoned Name Spaces (ZNS). ZNS partitions an SSD into separately addressable segments, to allow higher performing sequential (write) access within those zones. As SSD capacity has increased, IO activity has sky-rocketed and this has led to an “IO blender” effect. Within an IO blender, it’s impossible to understand which IO is following a sequential pattern and which is not. ZNS is intended to solve that probplem

With ZNS SSDs, IOs doing sequential access can have their own partition and that way the SSD can understand its sequential IO and act accordingly. It turns out that sequential writes to NAND can perform much, much faster than random writes.

ZNS was invented for SMR (shingled magnetic recording) disks, because these overwrote portions of other tracks (like roof shingles, tracks on SMR disks overlap). We had heard about ZNS at FMS2019 but had thought this just a better way to share access to a single SSD, by carving it up into logical (mini-)volumes. Jim said that was also a benefit but the major advantage is being able to understand sequential IO and write to the SSD more effectively.

We talked some on the economics of NAND flash, disk and tape as storage media. Jim and I see this continuing a trend that’s been going on for years, where NAND storage cost $/GB ~10X more than disk capacity, and disk storage costs $/GB ~10X more than tape capacity. All three technologies continue their relentless pursuit of increasing capacity but it’s almost like train tracks, all three $/GB curves following one another into the future.

On the other hand, high RPM disk seems to have died, and been replaced with SSDs. Disk manufacturers have seen unit declines but the # GB they are shipping continues to increase. Contrary to a number of AFA system providers, disk is not dead and is unlikely to die anytime soon.

Finally, we discussed DNA storage and it’s coming entry into the storage market. It’s all a question of price of the drive and media technology, size of the mechanism (drive?) and read and write access times. At the moment all these are coming down but are not yet competitive with tape. But given DNA technology trends, there doesn’t appear to be any physical barrier that’s going to stop it from becoming yet another storage technology in the enterprise, most likely at a 10X $/GB cost advantage over tape…

A frequent presenter at trade shows, Mr. Handy is known for his technical depth, accurate forecasts, widespread industry presence and volume of publication.

He has written hundreds of market reports, articles for trade journals, and white papers, and is frequently interviewed and quoted in the electronics trade press and other media.

In this episode, we talk with Jim Handy (@thessdguy), memory and flash analyst at Objective Analysis. Jim’s been on our podcast before and last time we had a great talk on flash trends. As Jim, Howard and Ray were all at Flash Memory Summit (FMS 2016) last week, we thought it appropriate to get together and discuss what we found interesting at the summit

Flash is undergoing significant change. We started our discussion with which vendor had the highest density flash device. It’s not that easy to answer because of all the vendors at the show. For example Micron’s shipping a 32 GB chip and Samsung announced a 1TB BGA. And as for devices, Seagate announced a monster, 3.5″ 60TB SSD.

MicroSD cards have 16-17 NAND chips plus a mini-controller, at that level, with a 32GB chip, we could have a ~0.5TB MicroSD card in the near future. No discussion on pricing but Howard’s expectation is that they will be expensive.

One main topic of conversation at FMS was how NVMe over fabric is emerging. There were a few storage vendors at FMS taking advantage of this, including E8 Storage and Mangstor, both showing off NVMe over Ethernet flash storage. But there were plenty of others talking NVMe over fabric and all the major NAND manufacturers couldn’t talk enough about NVMe.

Facebook’s keynote had a couple of surprises. One was their request for WORM (QLC) flash.  It appears that Facebook plans on keeping user data forever. Another item of interest was their Open Compute Project Lightning JBOF (just a bunch of flash) device using NVMe over Ethernet (see Ray’s post on Facebook’s move to JBOF). They were also interested in ganging up M.2 SSDs into a single package. And finally they discussed their need for SCM.

The other main topic was storage class memory (SCM), and all the vendors talked about it. Sadly, the timeline for Intel-Micron 3D Xpoint has them supplying sample chips/devices by year end next year (YE2017) and releasing devices to market with SCM the following year (2018). They did have one (hand built) SSD at the show with remarkable performance.

On the other hand, there are other SCM’s on the market, including EverSpin (MRAM) and CrossBar (ReRAM). Both of these vendors had products on display but their capacities were on the order of Mbits rather than Gbits.

It turns out they’re both using ~90nm fab technology and need to get their volumes up before they can shrink their technologies to hit higher densities. However, now that everyone’s talking about SCM, they are starting to see some product wins.  In fact, Mangstor is using EverSpin as a non-volatile write buffer.

Jim explained that 90nm is where DRAM was in 2005 but EverSpin/CrossBar’s bit density is better than DRAM was at the time. But DRAM is now on 15-10nm class technologies and sell 10B DRAM chips/year. EverSpin and CrossBar (together?) are doing more like 10M chips/year. The costs to shrink to the latest technology are ~$100M to generate the masks required. So for these vendors, volumes have to go up drastically before capacity can increase significantly.

Also, at the show Toshiba mentioned they’re focusing on ReRAM for their SCM.

As Jim recounted, the whole SCM push has been driven by Intel and their need to keep improving the performance of memory and storage, otherwise they felt their processor sales would stall. 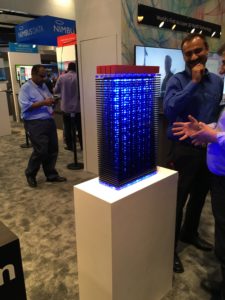 Just about every NAND manufacturer talked about their 3D NAND chips, ranging from 32 layers to 64 layers. From Jim’s perspective, 3D NAND was inevitable, as it was the only way to continue scaling in density and reducing bit costs for NAND.

Samsung was first to market with 3D NAND as a way to show technological leadership. But now everyone’s got it and providing future discussions on bit density and number of layers.  What their yields are is another question. But Planar NAND’s days are over. 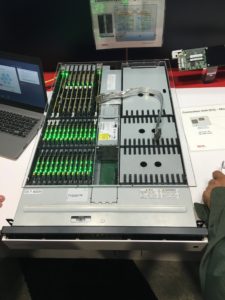 Toshiba’s keynote discussed a new flash storage system called the FlashMatrix but at press time they had yet to share their slides with the FMS team,  so  information on FlashMatrix was sketchy at best.

However, they had one on the floor and it looked like a bunch of M2 flash across an NVMe (over Ethernet?) mesh backplane with compute engines connected at the edge.

We had a hard time understanding why Toshiba would do this. Our best guess is perhaps they want to provide OEMs an alternative to SanDisk’s Infiniflash.

The podcast runs over 50 minutes and covers flash technology on display at the show and the history of SCM. I think Howard and Ray could easily spend a day with Jim and not exhaust his knowledge of Flash and we haven’t really touched on DRAM. Listen to the podcast to learn more. 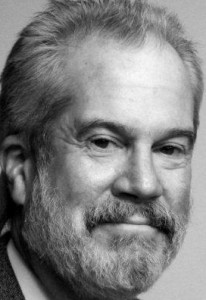 A frequent presenter at trade shows, Mr. Handy is known for his technical depth, accurate forecasts, widespread industry presence and volume of publication. He has written hundreds of market reports, articles for trade journals, and white papers, and is frequently interviewed and quoted in the electronics trade press and other media.  He posts blogs at www.TheMemoryGuy.com, and www.TheSSDguy.com.