In this episode, we talk with Andy Klein, Dir of Marketing for Backblaze, which backs up  desktops and computers to the cloud and also offers cloud storage.

Backblaze has a unique consumer data protection solution where customers pay a flat fee to backup their desktops and then may pay a separate fee for a large recovery. On their website, they have a counter indicating they have restored almost 22.5B files. Desktop/computer backup costs $50/year. To restore files, if it’s under 500GB you can get a ZIP file downloaded at no charge but if it’s larger, you can get a USB flash stick or hard drive shipped FedEx but it will cost you.

Early on Backblaze figured out the only way they were going to succeed was to use consumer class disk drives and to engineer their own hardware and to write their own software to manage them.

Backblaze has always been a surprisingly open company. Their Storage Pod hardware (6th generation now) has been open sourced from the start and holds 60 drives for 480TB raw capacity.

A couple of years back when there was a natural disaster in SE Asia, disk drive manufacturing was severely impacted and their cost per GB for disk drives, almost doubled overnight. Considering they were buying about 50PB of drives during that period it was going to cost them ~$1M extra. But you could still purchase drives, in limited quantities, at select discount outlets. So, they convinced all their friends and family to go out and buy consumer drives for them (see their drive farming post[s] for more info).

Howard said that Gen 1 of their Storage Pod hardware used rubber bands to surround and hold disk drives and as a result, it looked like junk. The rubber bands were there to dampen drive rotational vibration because they were inserted vertically. At the time, most if not all of the storage industry used horizontally inserted drives.  Nowadays just about every vendor has a high density, vertically inserted drive tray but we believe Backblaze was the first to use this approach in volume.

These days Backblaze has over 300PB of storage and they have  been monitoring their disk drive SMART (error) logs since the start.  Sometime during 2013 they decided to keep the log data rather than recycling the space. Since they had the data and were calculating drive reliability anyways, they thought that the industry and consumers would appreciate seeing their reliability info. In December of 2014 Backblaze published their hard drive reliability report using Annualized Failure Rates (AFR) they calculated from the many thousands of disk drives they ran every day. They had not released Q2 2017 hard drive stats yet but their Q1 2017 hard drive stats post has been out now for about 3 months.

Most drive vendors report disk reliability using Mean Time Between Failure (MTBF), which is the interval of time until half the drives will fail.  AFR is an alternative reliability metric, which is the percentage of drives that will fail in one year’s time.  Although both are equivalent (for MTBF in hours, AFR=8766/MTBF), AFR is more useful as it tells users the percent of drives they can expect to fail over the next twelve months.

It seemed to the Greybeards that SMR (shingle magnetic recording, read my RoS post for more info) disks would be a great fit for Backblaze’s application. But Andy said their engineering team looked at SMR disks and found the 2nd write (overwrite of a zone) had terrible performance. As Backblaze often has customers who delete files or drop the service, they reuse existing space all the time and SMR disks would hurt performance too much.

Besides disk reliability and performance, Backblaze is also interested in finding the best $/GB for drives they purchase. Andy said nowadays the consumer disk pricing (at Backblaze’s volumes) generally falls between ~$0.04/GB and ~$0.025/GB, with newer generation disks starting out at the higher price and as the manufacturing lines mature, fall to the lower price. Currently, Backblaze is buying 8TB disk drives.

The podcast runs ~45 minutes.  Andy was great to talk with and was extremely knowledgeable about disk drives, reliability statistics and “big” storage environments.  Listen to the podcast to learn more. 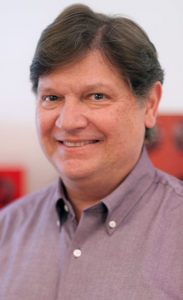 Mr. Klein has 25 years of experience in the cloud storage, computer security, and network security.

Prior to Backblaze he worked at Symantec, Checkpoint, PGP, and PeopleSoft, as well as startups throughout Silicon Valley.

He has presented at the Federal Trade Commission, RSA, the Commonwealth Club, Interop, and other computer security and cloud storage events