In this episode,  we talk with Taufik Ma, CEO, Attala Systems (@AttalaSystems). Howard had met Taufik at last year’s FlashMemorySummit (FMS17) and was intrigued by their architecture which he thought was a harbinger of future trends in storage. The fact that Attala Systems was innovating with new, proprietary hardware made an interesting discussion, in its own right, from my perspective.

Taufik’s worked at startups and major hardware vendors in his past life and seems to have always been at the intersection of breakthrough solutions using hardware technology.

Attala Systems is based out of San Jose, CA.  Taufik has a class A team of executives, engineers and advisors making history again, this time in storage with JBoFs and NVMeoF.

Ray’s written about JBoF (just a bunch of flash) before (see  FaceBook moving to JBoF post). This is essentially a hardware box, filled with lots of flash storage and drive interfaces that directly connects to servers. Attala Systems storage is JBOF on steroids.

Essentially, their composable storage infrastructure JBOF connects with NVMeoF (NVMe over Fabric) using Ethernet to provide direct host access to  NVMe SSDs. They have implemented special purpose, proprietary hardware in the form of an FPGA, using this in a proprietary host network adapter (HNA) to support their NVMeoF storage.

Their HNA has a host side and a storage side version, both utilizing Attala Systems proprietary FPGA(s). With Attala HNAs they have implemented their own NVMeoF over UDP stack in hardware. It supports multi-path IO and highly available dual- or single-ported, NVMe SSDs in a storage shelf. They use standard RDMA capable Ethernet 25-50-100GbE (read Mellanox) switches to connect hosts to storage JBoFs.

They also support RDMA over Converged Ethernet (RoCE) NICS for additional host access. However I believe this requires host (NVMeoF) (their NVMeoY over UDP stack) software to connect to their storage.

Okay on to the good stuff. Taufik said they measured their overhead and it was able to perform an IO with only an additional 5 µsec of overhead over native NVMe SSD latencies. Current NVMe SSDs operate with a response time of from 90 to 100 µsecs, and with Attala Systems Composable Storage Infrastructure, this means you should see 95 to 105 µsec response times over a JBoF(s) full of NVMe SSDs! Taufik said with Intel Optane SSD’s 10 µsec response times, they see response times at ~16 µsec (the extra µsec seems to be network switch delay)!!

They also use a management “entity” (running on a server or as a VM),  that’s used to manage their JBoF storage and configure NVMe Namespaces (like a SCSI LUN/Volume).  Hosts use NVMe NameSpaces to access and split out the JBoF  NVMe storage space. That is, multiple Attala Systems Namespaces can be configured over a single NVMe SSD, each one corresponding to a single  (virtual to real) host NVMe SSD.

The management entity has a GUI but it just uses their RESTful APIs. They also support QoS on an IOPs or bandwidth limiting basis for Namespaces, to control manage noisy neighbors.

Attala systems architected their management system to support scale out storage. This means they could support many JBoFs in a rack and possibly multiple racks of JBoFs connected to swarms of servers. And nothing was said that would limit the number of Attala storage system JBoFs attached to a single server or under a single (dual for HA) management  entity. I thought the software may have a problem with this (e.g., 256 NVMe (NameSpaces) SSDs PCIe connected to the same server) but Taufik said this isn’t a problem for modern OS.

Taufik mentioned that with their RESTful APIs,  namespaces can be quickly created and torn down, on the fly. They envision their composable storage infrastructure to be a great complement to cloud compute and container execution environments.

For storage hardware, they use storage shelfs from OEM vendors. One recent configuration from Supermicro has hot-pluggable, dual ported, 32 NVMe slots in a 1U chasis, which at todays ~16TB capacities, is ~1/2PB of raw flash. Taufik mentioned 32TB NVMe SSDs are being worked on as we speak. Imagine that 1PB of flash NVMe SSD storage in 1U!!

The podcast runs ~47 minutes. Taufik took a while to get warmed up but once he got going, my jaw dropped away.  Listen to the podcast to learn more. 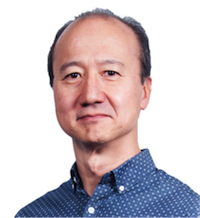 Tech-savvy business executive with track record of commercializing disruptive data center technologies.  After a short stint as an engineer at Intel after college, Taufik jumped to the business side where he led a team to define Intel’s crown jewels – CPUs & chipsets – during the ascendancy of the x86 server platform.

He honed his business skills as Co-GM of Intel’s Server System BU before leaving for a storage/networking startup.  The acquisition of this startup put him into the executive team of Emulex where as SVP of product management, he grew their networking business from scratch to deliver the industry’s first million units of 10Gb Ethernet product.

These accomplishments draw from his ability to engage and acquire customers at all stages of product maturity including partners when necessary.