In this episode, we talk with ClearSky Data’s Lazarus Vekiarides, CTO and Co-founder,  who we have talked with before (see our podcast from October 2015). ClearSky Data provides a storage-as-a-service offering that uses an on-premises appliance plus point of presence (PoP) storage in the local metro area to hold customer data and offloads this data to cloud storage. In addition to the on-premises storage-as-a-service they offer access to customer data from an in-cloud virtual appliance. ClearSky provides the whole storage service, including gigabit metro Ethernet connections from the customer to the POP for simple capacity based charge every month.

How does it work

Their Edge (on premises) appliance supports 24 SSDs and can scale up to 4 appliances. Soon a single appliance will be able to hold up to 32TB of data.  It’s intended to hold a data center’s entire working set for one week of activity. So essentially it’s a big caching appliance for the local data center

For ClearSky Data the lone source of truth for customer data lies in the PoP. The PoP is connected to metro wide fibre that is available in a number of large metropolitan areas. Laz says they have measured sub 500 µsec round trip response time between their PoP equipment and Edge appliance. The PoP provides the backing store for the Edge appliance. Data written to the edge appliance(s) are written through to the PoP storage. This data and it’s metadata (<1% of LUN size) is flushed to cloud storage which holds the data indefinitely.

DR through the PoP

But even if you wanted to fail over to a different metro area the PoP data is offloaded to the cloud continuously so while you wouldn’t attain an RPO=0 seconds, it could be awfully short, on the order of a couple of seconds.

ClearSky Data has recently enhanced their storage as a service to provide policy management over snapshots. That is you can establish policies as to how often to take LUN snapshots and how long to retain them in the cloud.

Also, ClearSky Data has added VMware functionality via plugins that allow their storage to know which VMs are writing data or are being backed up to their appliance. And this is included in the metadata written for a LUN which is offloaded to the cloud. Someday soon when you can have vSphere running bare metal in a public cloud service, you will be able to run the Cloud Edge (cloud software version of their Edge appliance) and restore the data from your data center directly to the cloud and have an iSCSI LUN available to EC2 running VMware providing complete Cloud DR for a data center.

We talked a bit about our favorite topic, NVMe storage and Laz sees a potential for it to help their Edge appliances but at the moment fault-tolerence/high availability is not there. And as they are primary storage for data centers HA is a critical capability.

Their product is priced as a service in $0.nn/GB/Month and if you do a 36 month cost analysis they feel they would come out cheaper than hybrid storage. They currently have PoP’s in Boston, NyNy, Northern Virginia, Dallas, and California. Laz says they believe there’s 15 major metropolitan areas across the USA they have targeted for service.  What nothing in Europe or Asia? We would imagine this is merely a question of the number of customers, amount of data and metro infrastructure.

The podcast runs ~24 minutes. Laz has been in the storage industry across a number of companies and has been with a few startups as well. Laz is very knowledgeable about storage, cloud, and metro networking, a good friend and is always a pleasure to talk with.  Listen to the podcast to learn more. 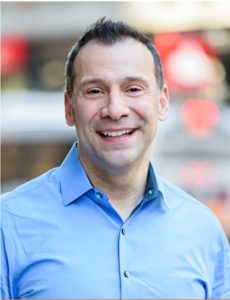