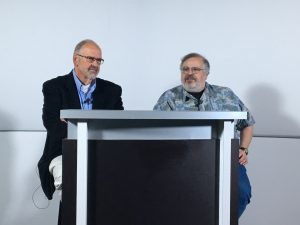 In this episode Howard and I were both at Dell EMC World2017 this past month and Alastair Cooke (@DemitasseNZ) asked us to do a talk at the show for the vBrownBag group (Youtube video here). The GreyBeards asked for a copy of the audio for this podcast.

Sorry about the background noise, but we recorded live at the show, with a huge teleprompter in the background that was re-broadcasting keynotes/interviews from the show.

Howard was at Dell EMC World2017 on a media pass and I was at the show on an industry analyst pass. There were parts of the show that he saw, that I didn’t and vice versa, but all keynotes and major industry outreach were available to both of us.

As always the Dell EMC team put on a great show, and kudos have to go to their AR and PR teams for having both of us there and creating a great event. There were lots of news at the show and both of us were impressed by how well Dell EMC have come together, in such a short time.

In addition, there were a number of Dell partners at the show. Howard met  Datadobi on the show floor who have a file migration tool that walks a filesystem tree and migrates files as well as reports on files it can’t. And we both saw Datrium (who we talked with last year).

Servers and other news

We both liked Dell’s new 14th generation server. But Howard objected to the lack of technical specs on it. Apparently, Intel won’t let specs be published until they announce their new CPU chipsets, sometime later this year. On the other hand, there were a few server specs discussed. For example, I was impressed the new servers would support many more NVMe cards. Howard liked the new server support for NV-DIMMs, mainly for the potential latency reduction that could provide software defined storage.

However, appliance hardware seems to be getting easier to upgrade. The new Unity AFA storage can be upgraded, non-disruptively from the low end to high end appliance by just swapping out controller hardware canisters.

Howard was also interested in Dell EMC’s new CloudFlex purchasing model for HCI solutions. This supplies an almost cloud-like purchasing option for customers. Where for a one year commitment,  you pay as you go (no money down, just monthly payments) rather than an up front capital purchase. After the year’s commitment expires you can send the hardware back to Dell EMC and stop paying.

We talked about Tier 0 storage. EMC DSSD was an early attempt to provide Tier 0 but came with lots of special purpose hardware. When commodity hardware and software emerged last year with NVMe SSD speed, DSSD was no longer viable at the premium pricing needed for all that hardware and was shut down. Howard and I discussed how doing special hardware requires one to be much faster (10-100X) than commodity hardware solutions to succeed and the gap has to be continued.

The podcast runs about 40 minutes. It’s just Howard and I talking about what we saw/heard at the show and the occasional, tangental topic.  Listen to the podcast to learn more.

Ray Lucchesi is the President and Founder of Silverton Consulting, a prominent blogger at RayOnStorage Blog, and can be found on twitter @RayLucchesi.